A global study has found strong evidence that a new form of the coronavirus has spread from Europe to the US. The new mutation makes the virus more likely to infect people but does not seem to make them any sicker than earlier variations of the virus, an international team of researchers reported Thursday.

“It is now the dominant form infecting people,” Erica Ollmann Saphire of the La Jolla Institute for Immunology and the Coronavirus Immunotherapy Consortium, who worked on the study, told CNN.

“This is now the virus.”

The study, published in the journal Cell, builds on some earlier work the team did that was released on a preprint server earlier in the year. Shared information on genetic sequences had indicated that a certain mutant version of the virus was taking over.

Now the team has not only checked more genetic sequences, but they have also run experiments involving people, animals and cells in lab dishes that show the mutated version is more common and that it’s more infectious than other versions.

“We do know that the new virus is fitter. It doesn’t look at first glance as if it is worse,” Saphire said. 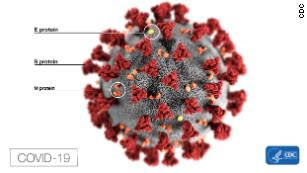 The mutation affects the spike protein — the structure the virus uses to get into the cells it infects. Now the researchers are checking to see whether this affects whether the virus can be controlled by a vaccine. Current vaccines being tested mostly target the spike protein, but they were made using older strains of the virus.

We provide you with Video, Audio, Photography services and the latest breaking news straight from the entertainment industry.
Contact us: admin@grandstyleent.com

Trump to donate 200 ventilators to Nigeria.. Questions arise of the...

April 30, 2020
US President, Donald Trump, has confirmed his government will be gifting Nigeria 200 ventilators as the nation battles the Corona virus pandemic. Recall President Buhari...
%d bloggers like this: